Jordan, often times, is overshadowed by those countries that borders the small, but significant country-Egypt, Israel, Syria and Saudi Arabia-and people tend to forget the deep history which shaped Jordan into the land that it is today.</p> <p>It is not just the breathtaking ‘Rose City’ (Petra) that attracts visitors from far and wide. Jordan is steeped in ancient stories from the distant past, with many revered reminders to prove it. At Bethany, you can walk the dirt path lined in tangles of trees to reach the spot where it is said that, John baptised Jesus in the Jordan River; elsewhere, one can follow the path of Lawrence of Arabia from his headquarters situated at Azraq through the desert of Wadi Rum (where the movie was filmed) or you can bask in the calming and relaxing waters of the Dead Sea and watch the sun set behind the cliffs of the other side, you can trek along the routes that were revealed in the Old Testament, or take in the view of the Promised Land that was revealed to Moses at the top of Mount Nebo, and gaze out over the lush valley that has changed little in the last 2,000 years.</p> <p>Jordan has many secrets that are waiting to be discovered and all before you. So take the journey into a land full of mystery and unearth these wonders for yourself.
Read more

Best Time to Visit Jordan Jordan has an exceptional range of climates for such a small country. This is heavily influenced by the country’s diverse levels of altitude. You have the higher northern and central regions, which between December ... 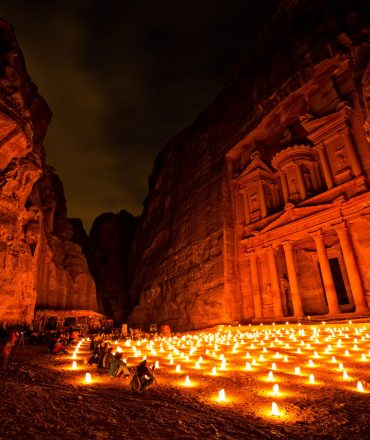